Moonbeam is an Ethereum-compatible smart contract platform on the Polkadot network that makes it easy to build natively interoperable applications. This Ethereum compatibility allows developers to deploy existing Solidity smart contracts and DApp frontends to Moonbeam with minimal changes. As a parachain on the Polkadot network, Moonbeam benefits from the shared security of the Polkadot relay chain and integrations with other chains that are connected to Polkadot.

This bug bounty program is focused on their Moonriver and Moonbeam parachains (deployed to Kusama and Polkadot respectively) and dApps and is focused on preventing:

Rewards are distributed according to the impact of the vulnerability based on the Immunefi Vulnerability Severity Classification System V2.2. This is a simplified 5-level scale, with separate scales for websites/apps and smart contracts/blockchains, encompassing everything from consequence of exploitation to privilege required to likelihood of a successful exploit.

All web/app bug reports must come with a PoC in order to be considered for a reward. For smart contract bug reports, at the discretion of the team, a PoC may be required in order to determine if the bug exists, and if necessary, to calculate the extent of the damage the bug could have if exploited.

The payout for critical vulnerabilities is dependent on the ratio between the funds at risk and the combined market cap (as listed on coinmarketcap on the day of the report) of the Moonbeam and Moonriver Blockchains.

The exact payout is determined as follows:

This results in the following payout graph: 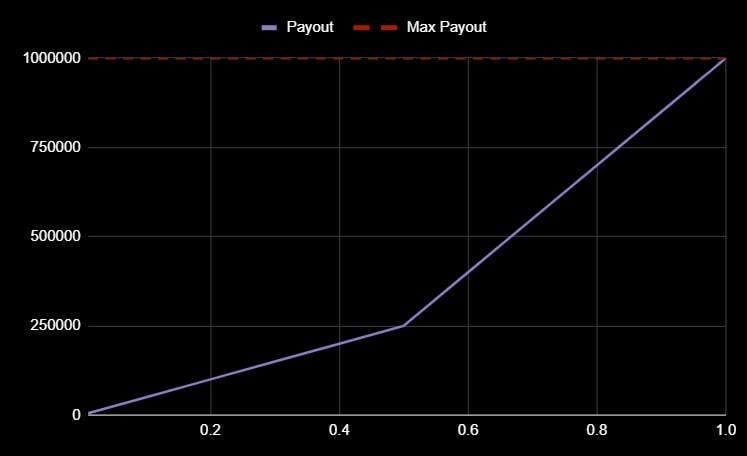 Note that a bug reported for one of either the Moonbeam or Moonriver networks that applies to both will be treated as a single report and paid only once.

The Moonbeam Foundation requires KYC to be done for all bug bounty hunters submitting a report and wanting a reward. The information needed is an ID scan along with a selfie to verify identity.

Payouts are handled by the Moonbeam Foundation team directly and are denominated in USD. However, payouts are done in USDT or USDC.

The Moonriver parachain on Kusama and the Moonbeam parachain on Polkadot (estimated launch in Jan 2022) are both included in the assets-in-scope.

All source code of Moonbeam can be found at https://github.com/PureStake/. However, only those in the Assets in Scope table are considered as in-scope of the bug bounty program.

The Moonriver parachain on Kusama and the Moonbeam parachain on Polkadot (estimated launch in Jan 2022) are both included in the assets-in-scope.

All source code of Moonbeam can be found at https://github.com/PureStake/. However, only those in the Assets in Scope table are considered as in-scope of the bug bounty program.

Only the following impacts are accepted within this bug bounty program. All other impacts are not considered as in-scope, even if they affect something in the assets in scope table.

Out of Scope & Rules

The following vulnerabilities are excluded from the rewards for this bug bounty program:

The following activities are prohibited by this bug bounty program: